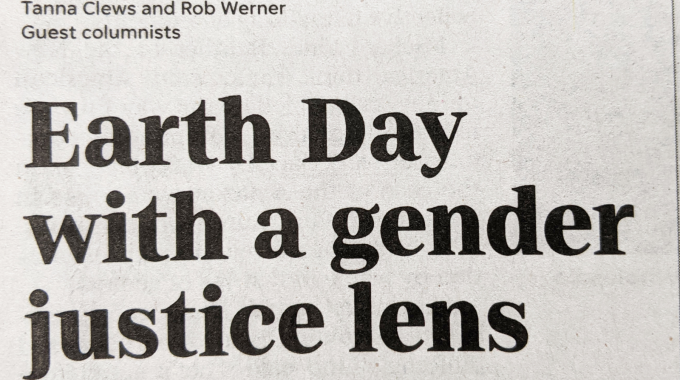 CEO Tanna Clews teamed up with League of Conservation Voters’ New Hampshire State Director Rob Werner to talk about the intersection of climate justice and gender justice, ahead of two events we’re presenting that will explore these topics further.

Across the board, women are disproportionately affected by climate change. Women make up 70% of the global population living in poverty. Through rising sea levels and extreme weather events, global warming places millions of people at risk of displacement — a staggering 80 percent of whom are women. Climate change severely impacts the agricultural industry, and in developing countries, women are responsible for producing 60–80% of food. Climate change-related extreme weather events are also associated with greater risks of low birth weight and preterm births.

With women disproportionately carrying the burden of climate change, it should come as no surprise that they are also more likely to recognize the dangers of climate change. According to a 2020 report by the Women’s Environment and Development Organization (WEDO) and the Sierra Club, 53% of women, as compared to 45% of men, believe the climate crisis is currently harming the United States. Latinx (67%) and Black (63%) women are the most likely to agree with this statement.

Policymakers are already starting to bring gender and racial equity into their plans to combat climate change. The Paris Climate Agreement specifically names “gender equality, empowerment of women and intergenerational equity” as being essential to addressing climate change, and calls for a gender-responsive approach in solutions.

Women are not just experiencing the negative effects of climate change — they are also at the forefront of finding solutions. In her 2018 TED Talk, “How empowering women and girls can help stop global warming,” Dr. Katharine Wilkinson noted that “to address climate change, we must make gender equity a reality. And in the face of a seemingly impossible challenge, women and girls are a fierce source of possibility.”

President Biden has just appointed a woman at the forefront of energy justice, Shalanda Baker, as the first ever Deputy Director of Energy Justice, for the Department of Energy. “I’m excited about the potential to remediate the most hazardous and harmful impacts of climate, while also creating opportunities for economic empowerment in the communities who are most impacted by climate change.” Having women with an intersectional perspective on climate change leading our energy policy is a great step forward.

New Hampshire certainly has its own share of women who are on the forefront of climate policymaking. Congresswoman Annie Kuster serves on the House Committee on Commerce and Energy and has released a comprehensive Clean Energy Agenda, prioritizing 20 bills to advance climate change action and move the nation towards a clean energy future. New Hampshire State Senator Rebecca Perkins Kwoka serves on the Senate Energy and Natural Resources Committee and serves as Counsel to SunRaise, a New England based renewable energy developer.

Recognizing the intersection of our work, the New Hampshire Women’s Foundation and League of Conservation Voters are teaming up to present two upcoming virtual events featuring these state and national leaders in climate justice. Both events will focus on underrepresented groups including women, people of color, and lower-income folks.

On Wednesday, April 21st, the Earth Day Women’s Wednesday event will feature Congresswoman Kuster, State Senator Perkins Kwoka and US Department of Energy Deputy Director of Energy Justice Baker. Before her appointment in this energy justice role, Deputy Director Baker co-created and co-directed the Northeastern University’s Initiative for Energy Justice, where she also served as Professor of Law, Public Policy and Urban Affairs. She recently published Revolutionary Power: An Activist’s Guide to the Energy Transition, a powerful book at the forefront of climate justice.

On Tuesday, May 4th, renowned environmental leader Dr. Katharine Wilkinson will be a featured guest for the Women’s Foundation Gender Justice Cafe event, on climate feminism. Wilkinson’s book, Drawdown: The Most Comprehensive Plan Ever Proposed to Reverse Global Warming, is a New York Times Bestseller. She is co-editor with Ayana Elizabeth Johnson of All We Can Save: Truth, Courage, and Solutions for the Climate Crisis, which is already a national bestseller.

As we celebrate Earth Day this year, we hope you’ll add a gender lens to your consideration of climate justice. The promise of solutions from bold women and eco-feminists that lead the fight against climate change, contrasted with the disproportionate burden that women bear for environmental harms, calls us to action. There is no climate justice without gender justice.

Tanna Clews is the CEO of the New Hampshire Women’s Foundation.

Rob Werner is the New Hampshire State Director for the League of Conservation Voters.

Read the article on SeacoastOnline.com here:

UPDATE 3/25/22, from our NHWF Weekly newsletter: The U.S. Census Bureau’s most recent data from…