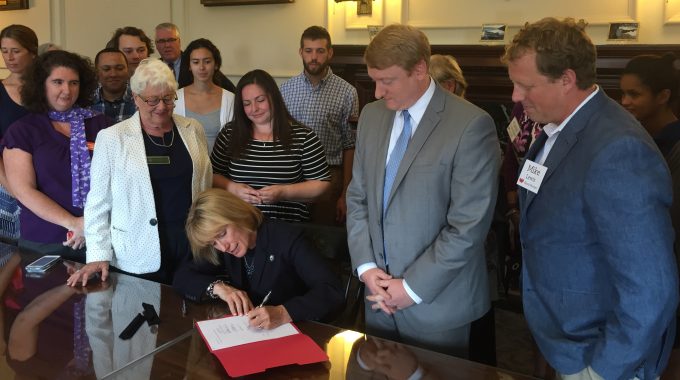 If a bill passes the full House or the full Senate, it either “crosses over” to the other chamber, or it goes to another policy committee in the same chamber. Any bill that spends state money also has to go to the House Finance Committee or Senate Finance Committee, which analyzes its financial impact. These are the same powerful committees that write the state’s budget every two years. Eventually, every single bill will either die in the first chamber or cross over to the second chamber.

If a bill crosses over, it starts the whole committee process all over again in the second chamber. If it manages to pass the second chamber, it heads to the Governor. The Governor can sign the bill, veto it, or allow it to become law without his signature. It’s a long road to the Governor’s signature and most bills die along the way, but every year many bills manage to cross the finish line. Some become law right away, and others have an effective date in the future.

There are lots of ways to keep up with what’s going on at the New Hampshire Legislature. You can find a wealth of information on the Legislature’s comprehensive website. Most major local media outlets regularly report about what’s going on in Concord. Here at the New Hampshire Women’s Foundation, we’ll be updating our website and social media platforms with news about legislation we’re following and opportunities to get involved. Make sure to sign up for our email list and find us on Facebook, Twitter, and Instagram. If want to speak up about bills but not you’re not sure where to start, check our comprehensive Advocacy Toolkit. It can help you find your legislators, speak at a public hearing, write a great letter to the editor, and more. Your voice matters. Use it!

Attending the Women's March in Concord or Portsmouth this weekend? Download your free NHWF March…