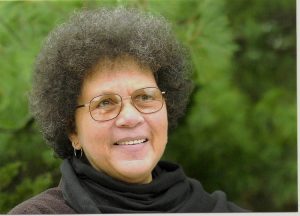 Valerie Cunningham credits the local civil rights activists of Seacoast New Hampshire and Maine for being models of persistence and reconciliation when she was growing up. Their actions and attitudes encouraged her to learn more about the forgotten history of African Americans in New Hampshire. In 1961 she was elected secretary of the Portsmouth branch of the NAACP, which her parents had helped to establish, and in April 1965 she marched for school integration in Boston with Dr. Martin Luther King, Jr. It was during those turbulent sixties that Cunningham discovered the power of the written words that had been omitted from the history she was taught at school. She began researching public archives to document the local history that continues to be explored and shared through programs of the Black Heritage Trail of New Hampshire.

In 2003 Cunningham was appointed as a representative of the ‘descendent community’ to the mayor’s committee for creation of a memorial park at the site designated on the Portsmouth Black Heritage Trail as an 18th century African Burying Ground. Among Cunningham’s many social justice activities was the twenty-year long struggle to establish a holiday for Dr. Martin Luther King in the State of New Hampshire.  Valerie served on the UNH Commissions for the Status of Women, and was appointed by the governor to the NH State Women’s Commission, where she co-chaired a committee that created the NH Women’s Heritage Trail.