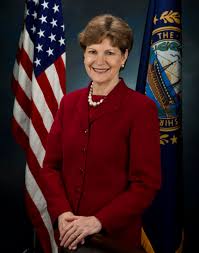 Senator Jeanne Shaheen was the first woman in U.S. history to be elected both a Governor and a United States Senator. She is committed to serving the citizens of New Hampshire and is known for her common-sense leadership, hard work and dedication to improving the lives of the middle class. She has served in the Senate since 2009 and is a member of the Senate Committees on Armed Services, Foreign Relations, Appropriations, Small Business and Entrepreneurship and the Select Committee on Ethics.

Senator Shaheen is a champion for women here at home and around the globe. In 2018, she worked to broaden the Violence Against Women Act (VAWA) in order to better investigate and prosecute violent crimes against women. In 2016, President Obama signed into law the Shaheen-authored Sexual Assault Survivors’ Rights Act, a federal bill of rights for sexual assault survivors. Jeanne Shaheen has also been a consistent supporter of Planned Parenthood and the critical health services it provides to thousands of Granite Staters. She has led bipartisan efforts in Congress to permanently repeal the Trump administration’s expanded Global Gag Rule, which undermines the availability of family planning and other health care services in developing countries, and got legislation signed into law that gives women a seat at the table to better facilitate lasting conflict resolution around the world.

Shaheen was born in Saint Charles, Missouri. Her father worked his way up to a management position in a shoe factory and her mother worked as a secretary in their local church. After attending public schools, Shaheen received a bachelor’s degree from Shippensburg University in Pennsylvania and a master’s degree from the University of Mississippi. She and her husband, Bill, live in Madbury and have three daughters, Stefany, Stacey and Molly, and seven grandchildren.