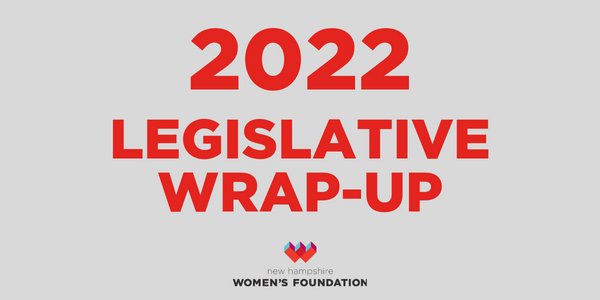 This past legislative session, the New Hampshire Women’s Foundation advocated on behalf of several bills that had the potential to impact the well-being of women and girls across the state. Here’s a brief summary of our key priorities during the 2022 legislative session.

Limiting the harm done by the abortion ban (HB1609)

In June 2021, Governor Sununu signed the first abortion ban in modern history, banning abortion after 24 weeks. During the 2022 legislative session, the Women’s Foundation advocated for a full repeal of that ban, and though a full repeal was unsuccessful, we are pleased that some of the harms of the ban were eliminated. The original abortion ban did not include exceptions for fatal fetal anomalies — circumstances that leave pregnant people in heartbreaking and dangerous circumstances. After hearing courageous and moving testimony from women who had lived experience with fatal fetal diagnoses, legislators added an exception for these circumstances to the 24-week ban. Additionally, the original ban included a requirement that all abortions before 24 weeks include an ultrasound. Ultrasounds, particularly for early abortion, are medically unnecessary and physically intrusive. The New Hampshire Women’s Foundation, along with our reproductive rights coalition partners across the state, were successful in further limiting the harm done by the ban by limiting the scope of the required ultrasound to only at or near 24 weeks. Abortion is an essential aspect of reproductive health care and any limits, restrictions or prohibitions to this care jeopardizes the well-being of all people who can become pregnant. (Read our testimony on this bill). 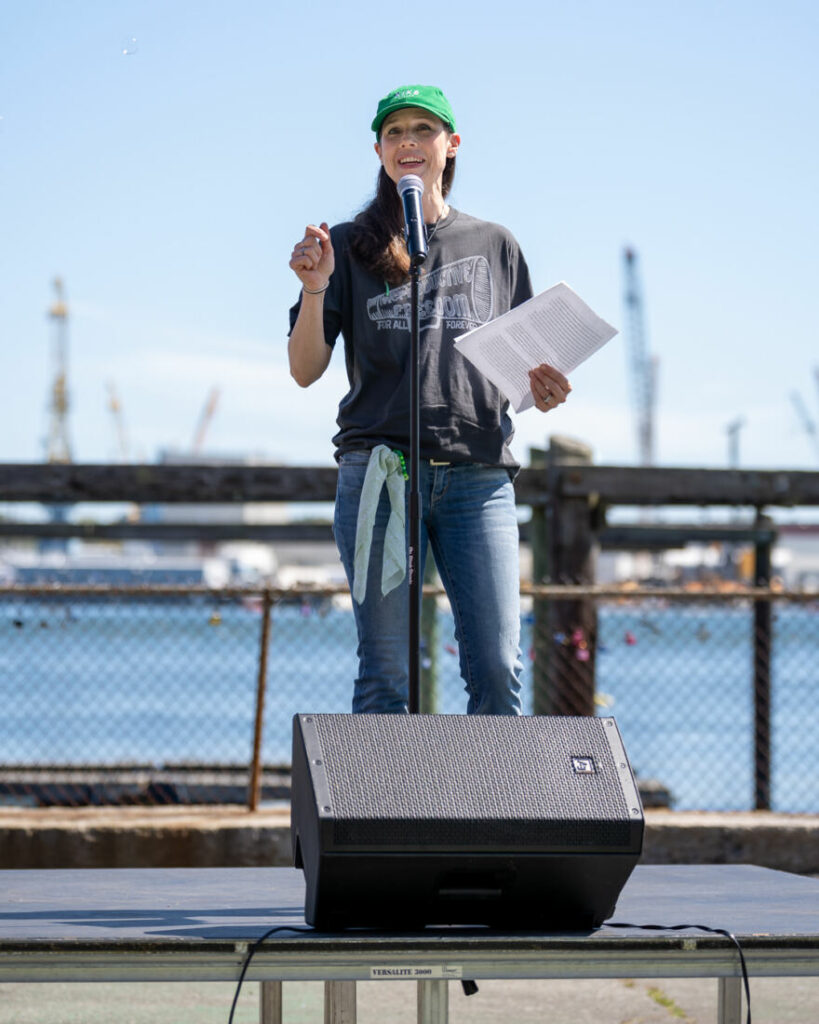 Michelle Cilley Foisey, pictured here speaking at a rally the Women’s Foundation organized in Portsmouth in May 2022, was one of the women whose powerful testimony influenced legislators to add fatal fetal anomaly exceptions to New Hampshire’s recent abortion ban.

Women are the majority of both child care workers and essential workers (including health care, service industry and teaching) who rely on child care. Mothers are four times more likely than fathers to cut hours or leave their jobs if they do not have access to reliable child care. The New Hampshire Women’s Foundation celebrates the passage of the “Workforce Behind the Workforce Act,” which directs the Department of Health and Human Services to develop a plan to foster sustainable childcare opportunities for working families and businesses. The plan would potentially include providing child care workers with sign-on and longevity bonuses to bolster and sustain this crucial industry. Our CEO, Tanna Clews, wrote an op-ed with Michael Skelton, CEO of the Business and Industry Association of New Hampshire, in support of this legislation. (Read our testimony on this bill).

Currently, pregnant women in New Hampshire who do not income-qualify for Medicaid may qualify at a higher income threshold during pregnancy, birth, and up to two months postpartum. Recognizing that moms need access to health care longer than two months postpartum, the New Hampshire Women’s Foundation supported the “Health Moms Healthy Babies Act.” This bill would have instructed the state to opt in to a federal program to continue Medicaid coverage to 12 months postpartum for those who would otherwise no longer income-qualify. Access to this health care coverage would reduce maternal mortality, treat maternal depression and provide preventive and acute care for all other health concerns for a year following pregnancy/birth. The Women’s Foundation was disappointed this legislation died in Committee of Conference, though we will seek alternative approaches to take advantage of this federal program. (Read our testimony on this bill).

As of March 1, 2022, 141 women were incarcerated at the New Hampshire Women’s Prison (Women’s Prison), 86% of whom are within childbearing age (20-49 years old). People who are incarcerated are sometimes shackled at the wrists and ankles. Shackling an incarcerated pregnant person interferes with the ability of clinicians to safely practice medicine and may put the health of the pregnant person and baby at risk. The American College of Obstetricians and Gynecologists (ACOG) supports policies restricting the use of shackles throughout pregnancy, labor, delivery, transport and postpartum recovery. The Women’s Prison follows national best practices related to shackling pregnant people, though there may be inconsistencies in policies among county correctional facilities. We were pleased the legislature passed, and Governor Sununu signed, legislation to codify best practices at all New Hampshire prisons and jails, virtually eliminating the practice of shackling pregnant people who are incarcerated during labor, childbirth and postpartum. All pregnant people deserve to have the dignity of a pregnancy and a childbirth that allows for movement and appropriate and accessible patient care. (Read our testimony on this bill).

According to our research, girls are nearly twice as likely as boys to experience symptoms of depression, and 1.6 times more likely to consider suicide. These disparities are greater for girls of color. Youth with poor mental health are at an increased risk of drug and substance use, poor academic performance and social isolation. We celebrated the passage of legislation that requires public schools, charter schools and universities who already provide student identification cards to include the National Suicide Prevention Lifeline on the card. This summer, the Lifeline became more accessible than ever through the three-digit number “9-8-8”, which we anticipate will further improve students’ access to mental health resources. (Read our testimony on this bill).

The Youth Risk Behavior Survey (YRBS) is an anonymous survey taken by middle and high school students every year and collects data about behavioral health including seat belt use, exercise and eating habits, mental health, alcohol and drug use, intimate partner violence, bullying and other areas related to health. This survey is one of the only, and arguably the most reliable, source of data on youth, as well as one of the few New Hampshire data sources that can be broken down by gender, race and ethnicity. A bill was introduced that would change the YRBS from an “opt-out” survey to an “opt-in” survey, meaning every student would need parental permission to participate, thereby greatly reducing the validity and usefulness of the survey. We are grateful this legislation failed. (Read our testimony on this bill).

For a more detailed look at each of these bills, visit our Legislation page.