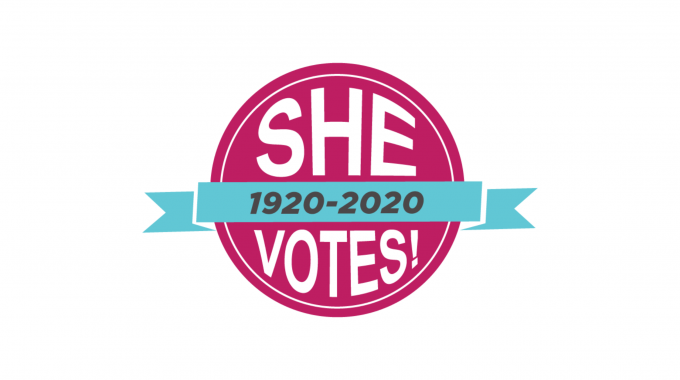 As we celebrate the centennial anniversary of the 19th Amendment as a hard-fought victory, we also recognize that there’s still much work that needs to be done to ensure equal access to the vote, as well as broader gender equity and political parity for everyone. 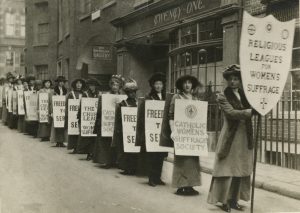 Not all women got access to the ballot box in 1920. It wasn’t until the 1965 Voting Rights Act that most Black women were able to access their right to vote. And it was not until the 1975 expansion of the Voting Rights Act that non-English speaking women, including many Latinx and Asian American women, were granted that same access. Native American women, houseless women, incarcerated women, poor women and more still face discriminatory documentation requirements and other modern-day poll taxes. The work continues to ensure that all people can vote, and achieve equal representation.

Reflecting on the implications of women’s suffrage, past and present, the Women’s Foundation launched our “She Votes” series to explore how we can help fulfill the promise of the 19th Amendment.

The She Votes series explored women’s suffrage through a variety of lenses. Throughout the fall, the Women’s Foundation presented conversations with experts on voting in New Hampshire, and partnered with other organizations to amplify the importance of intersectionality in our work advocating for women’s continued participation in our democratic process. 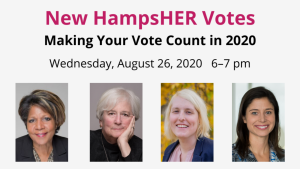 In August we hosted New HampsHER Votes to explore how 2020 was both expanding and presenting new challenges to women casting their ballots. The panel was led by legal expert Maggie Goodlander, and included State Senator Melanie Levesque, longtime State Representative Marjorie Smith and ACLU’s Trans Justice Organizer Palana Belken. The group discussed the importance of a fair redistricting process, what new voting options were available due to COVID-19, and how we can continue to advocate for everyone’s voice to be heard.

In September, we co-sponsored, with Global Citizen’s Circle and Southern New Hampshire University, a conversation with Barbara Arnwine to explore the role in women’s suffrage that Black women like Pauli Murray played. Arnwine noted the continued link between women’s rights and civil rights for Black Americans, saying “It’s the intersectional failure of the suffrage movement that has brought us here — we continue to suffer the racist arguments used to promote the 19th Amendment.”

Also in September, we were proud to be a sponsor of Black New England Conference, “Black Women Rock!”, organized by Black Heritage Trail — two full days of educational, inspiring and engaging speakers, as well as panels and online community building. Panelists from Sheryl Lee Ralph to Ayanna Pressley discussed the importance of women exercising their right to vote. Panelists lifted up the resilience, versatility and courage of Black women, and noted how activists and elected officials reflected on the storied history of suffrage for women, Black Americans and other marginalized groups of people.

Finally, we wrapped up our She Votes events with our annual WBC Lunch-Online, where our featured special guest was former Secretary of State Hillary Rodham Clinton. Secretary Clinton’s famous proclamation, “Women’s rights are human rights and human rights are women’s rights, once and for all,” was given 25 years ago at the 4th Annual Conference on Women and was the historic moment that inspired the New Hampshire women in attendance to form the New Hampshire Women’s Fund. It was so special to have her celebrate this milestone year with us, and offer us these words of encouragement: “Keep going, New Hampshire women! The best is yet to come!”

This article appears in the Winter 2020 edition of the New Hampshire Women’s Foundation newsletter, which you can view online below. (Get the next one mailed to you by signing up here.)