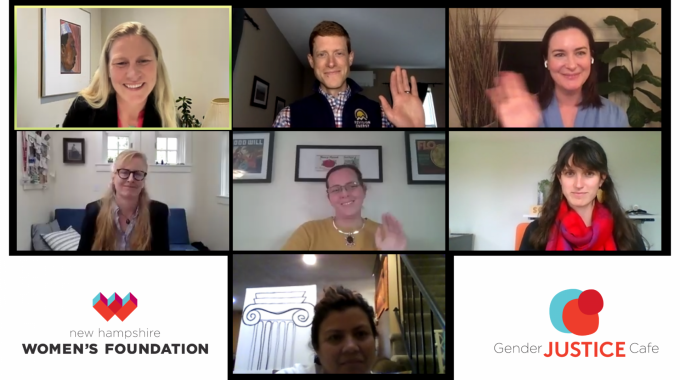 With the help of our series sponsor ReVision Energy, NHWF has used the Gender Justice Cafe series to create spaces to explore how various justice issues intersect with gender justice, here in New Hampshire and more broadly. In our Climate Feminism conversation, we teamed up with League of Conservation Voters to address clear themes of gender inequality in climate activism among women and girls locally and regionally, including access to resources and versatility in leadership.

When you think of climate activism, you don’t often think that climate activism and feminism go hand in hand. Dr. Katherine Wilkinson, our guest speaker opening up the panel discussion, explained that in order to have climate justice, we have to have gender justice. Women globally are more affected by climate change poverty, rising sea levels and extreme weather events. One example of gender inequality in climate change: climate change is directly affecting the agricultural industry and the overall production and quality of food and in developing countries, women are responsible for 60-80% of producing all food.

Dr. Wilkinson noted that as the earth’s temperature has increased there has been a rise in gender-based violence. She said, “Climate change is deepening existing gender inequalities from domestic abuse to sex trafficking and beyond.” When asked by the event moderator, Daniel Weeks, about the meaning of Climate Feminism, Dr. Wilkinson said, “A gender just world is not possible in the absence of rapidly and radically transforming the global economy and stemming greenhouse gasses…when we think about a feminist future could look like, we have to think about that in the context of a warming world.”

In previous conversations on gender justice, we see lack of access to resources and representation in leadership as continued obstacles for reaching gender justice, which is also a topic of importance when we think of climate justice. The inspiration behind writing her bestselling book All We Can Save, Dr. Wilkinson said that the books she read on climate activism were written by “mostly men, mostly white, mostly older” authors, and when we see climate activism in the mainstream media, again it’s presented by “mostly men, mostly white, mostly older” people. She said, “when we’re talking about a planetary crisis, we have look at it with a kaleidoscope…all perspectives are limited, we need layering of experiences, perspectives, analyses and visions to begin to make sense of the problem in a holistic and helpful way.”

In addition to the data set presenting the intersection of climate justice and gender justice, there’s also a positive data set that shows, “When women are present and leading, climate policy is more effective, emissions reductions are more effective, protection of land is more effective.” Dr. Wilkinson states it’s a “very clear necessity of gender privity in leadership.”

We see this impact of leadership in the featured panel, like Maria Perez, NH State Representative (Milford), who is currently fighting for clean water in New Hampshire and recently proposed a bill (SB114), which would require training of NH State Park officials to handle race and gender discrimination on public land and parks. Denise Pouliot is also leading change by stopping the renewal of dam leases that are affecting the local ecosystem.

When asked what the community of New Hampshire can do now to fight the climate crisis, Julia Dundorf, Executive Director of the New England Grassroots Environment Fund, noted that because New Hampshire is a small state, our community is in a unique situation to “have a lot of impact.” She went on to explain that we, as a society, need to think about how we’re meeting and ask questions like: Who is communicating these meetings? When are we meeting? Are we providing childcare? Do we have systems and protocols to hear divergent and non-traditional voices to lean on differences? Simple implements such as providing childcare during meetings and events can open up opportunities for working mothers, which the NHWF has seen with Women Run! events.

Denise K. Pouliot stressed the importance of speaking up and showing up for your environment and organizations that are working to protect it. “We only have one planet! When we talk about environmental justice, we’re actually talking about survivability of us as a species.”

Representative Maria Perez also championed speaking up for your community and environment and the importance of talking to your regional legislatures. On the topic of water contamination, she said, “The people of New Hampshire do care.” By writing your legislature, leaving voicemails, or even testifying gives more power to the community—the most important decision makers for the environment.

Part of the goal of Gender Justice Cafe is to help answer the question: “How do we move from ‘Just Is’ to ‘Justice’”? When the panel was asked this question, all described the importance having access to resources, and the importance of philanthropy to support environmental programs and organizations such as Grassroots and Cowasuck Band of the Pennacook Abenaki People. Without the capital to do the work, as Dr. Wilkinson simply stated, “it won’t work.”