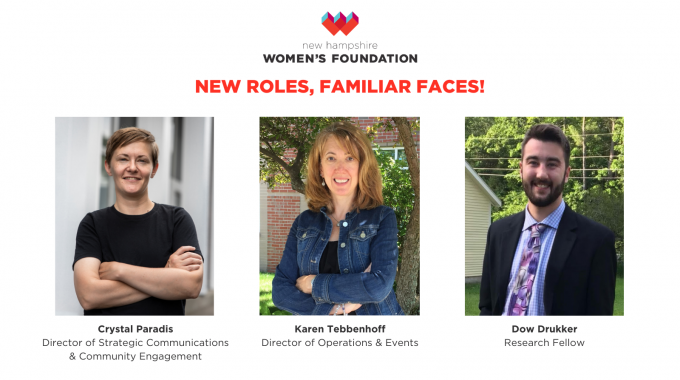 We are excited to announce three key personnel changes: Crystal Paradis has been hired as Director of Strategic Communications and Community Engagement; Karen Tebbenhoff is transitioning to an expanded role of Director of Events and Operations; and Dow Drukker has been hired as a Research Fellow. Both Paradis and Drukker officially join the team after previously doing part-time or project-based work with the Foundation. Tebbenhoff previously served as the Foundation’s Director of Communications and Events.

“These moves mark an exciting shift as our Board has just approved a new strategic plan that will guide our next 3–5 years,” said Foundation CEO Tanna Clews. “I’m excited to continue our longstanding relationship with Crystal Paradis, who has had deep ties to the organization since 2011 when she worked with several of our predecessor organizations. Karen Tebbenhoff has been an invaluable member of our staff for five years, and her expanded role in operations will be instrumental to our continued growth. Dow Drucker started as an intern last year and had an immediate impact on our research program, most notably playing a pivotal role in our “Women in COVID” special issue of Gender Matters. We’re excited to bring him on as a Fellow to help us continue to highlight important data about New Hampshire women and girls.”

The Foundation will be rolling out parts of its newly-approved strategic plan in the coming months, but some key highlights include a focus on community engagement with additional partnerships around the state, expanding the Foundation’s suite of philanthropic tools specifically for donors seeking gender lens philanthropy, growing the Women Run! program at the local level, and the launch of a new quarterly “Gender Justice Cafe” speaker series, which kicked off on March 8th for International Women’s Day.

Prior to coming on board with the Foundation, communications specialist Crystal Paradis founded Feminist Oasis, a social enterprise that produced events, resources and membership offerings to explore intersectional feminist values in action. Her communications background includes working with local and national clients to improve messaging and broaden online reach. Her community engagement work has ranged from organizing TEDx events and local speaker series, to working on state and national political and issues-based advocacy campaigns. She published the popular #PortsmouthLOVE Letter prior to moving to Somersworth, NH, where she currently serves as a City Councilor At-Large. Her volunteer work includes serving as a board member of SOS Recovery Community Organization.

Statement of Solidarity with Marginalized Genders in Afghanistan

Despite Historic Political Engagement, Gains for Women in Public Office are Slow and Uneven Download…