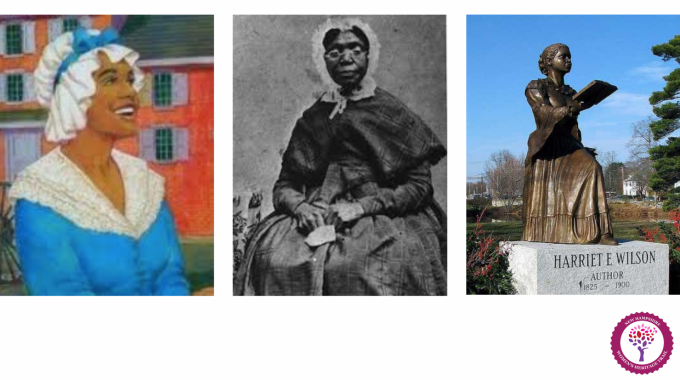 Ona Marie Judge Staines was the enslaved body servant of Martha Washington in what was then the United States capitol, Philadelphia. In 1796, Judge fled to Portsmouth, New Hampshire. There, she met and married a mariner, Jack Staines; they made their home in the adjacent rural town of Greenland with their three daughters. Jack was presumed to have died at sea when he did not return from a voyage. Each of the Staines’ children also predeceased Ona. She continued to live in the town with the freed family of a man formerly owned by a prominent New Hampshire merchant. Because President Washington had endorsed the Fugitive Slave Act of 1791, Ona Judge remained a fugitive for the rest of her life. The house itself no longer stands but her unmarked gravesite remains undisturbed on the property where she had chosen to live.

Dinah [Chase] Whipple ran the Ladies Charitable African Society School for African children in Portsmouth, the only school known to exist in the state of New Hampshire for former slaves or their children. Dinah was emancipated by her owner, Rev. Stephen Chase of New Castle, when she reached her 21st birthday. On that same day, she married Prince Whipple, the still-enslaved personal servant of Revolutionary War General William Whipple. Prince died in 1797, leaving Dinah and several young children living in the house they shared with another Black family in back of what is known today as the Moffatt-Ladd House. Dinah operated the school in her home from around 1807 until at least 1835. While little survives in her own words, public documents reveal much about Dinah Whipple’s accomplishments as a citizen.

Harriet Wilson was born Harriet E. Adams in Milford, New Hampshire, to a White mother and a Black father. She is the author Our Nig (1859), believed to be the first novel by an African-American woman to be published in the United States. Wilson’s autobiographical novel describes the life of an abused mulatto child and her forced servitude at the hands of northerners, thus opening up questions of slavery in the North. Harriet married Thomas Wilson in 1851 and gave birth to a son, George, in 1852. Poverty stricken after her husband’s disappearance, Wilson wrote Our Nig to support herself and her child. George, however, died the next year and Wilson herself disappeared from record books. Researchers uncovered her life as a spiritualist and medium in Massachusetts, which lasted another thirty years. Harriet Wilson died in Quincy, Massachusetts, and is buried there in Mount Wollaston Cemetery.

Just released: New research on the number of women running for office in New Hampshire.…

Today, Governor Sununu signed HB 1609 into law, which reduces the harm done by the…